Asbestos is a generic term applied to some mineral silicates of the serpentine and amphibole groups, whose characteristic feature is to crystallise in fibrous form.

There are many members of the family – common among these are blue asbestos (crocidolite), white (chrysotile) and brown or grey asbestos (amosite). 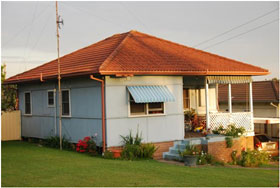 Other forms of asbestos include anthophyllite which was used mainly in Finland.

However tremolite, said to be part of the amphibole asbestos group, was used in some commercial talcs in small quantities and is also a contaminant of other asbestos types, e.g. chrysotile (white asbestos).

The three most common types of asbestos that were mainly used in a wide range of products are:

Until the late 1960s, the Australian industry used both serpentine (75%) and amphibole (25%) asbestos.

Subsequently, the use of chrysotile increased to approximately 95% whilst blue and grey asbestos declined to 5%.

Asbestos is one of the most useful and versatile minerals known to man mainly because of its unique properties, flexibility, tensile strength, insulation   (from heat and electricity) and chemical inertness.

It is the only natural mineral that can be spun and woven like cotton or wool into useful fibres and fabrics.

The importation of Asbestos will cease at the end of 2003 however, there will be limited exceptions for the approved use of asbestos products in highly specialised industries.

Some other uses of asbestos include fencing, asbestos pipes, thermal insulation, fire proofing, as an additive in paints and sealants, in textiles such as   felts and theatre curtains, in gaskets, and in friction products like brake linings, and clutches.

Workplaces such as ships’ engine rooms and power stations were heavily insulated with sprayed limpet asbestos.

Asbestos (from the Greek ‘amiantus’, meaning unquenchable) has been known and used for approximately 4500 years. Many centuries before Christ, Finnish peasants mixed it in pottery and sealed cracks in their log huts with it.

The ancient Greeks used it to make wicks for their lamps. The ancient Romans wove asbestos fibres into fabrics to make towels, nets and even head coverings for women.

In medieval times Emperor Charlemagne reportedly used an asbestos tablecloth to convince some Barbarian guests that he had supernatural powers – by throwing it into a fire and pulling it out unsigned!

Some enterprising medieval merchants even sold asbestos crosses, citing their resistance to fire as evidence that they were made from wood of ‘the true cross’.

Asbestos remained little more than a curiosity until the advent of the Industrial Age in the 1800s when industry realised its potential uses.

Before long, asbestos supported a flourishing global industry, even though in the early 1900s doctors in Europe knew that asbestos workers were dying from respiratory ailments. (In about 1900 Dr Montague Murray reported on pulmonary fibrosis (asbestosis) in workers employed in the asbestos industry.)

By the 1930s there was a substantial amount of scientific knowledge accumulated concerning asbestos-related diseases. However, this did not deter Industry from mining and manufacturing numerous products containing various types of asbestos for domestic and industrial uses.

Asbestos In The Community

The third wave affected former building and construction workers and continues to do so. Now, due to decaying asbestos products the fourth wave of asbestos diseases, more subtle and insidious, is stalking a wide range of Australians at work, at school and in the home.

The consequence of the fifth wave is still yet to come (workers from asbestos removal industry and consequence of uncontrolled-unsafe removal of asbestos cement products).

Asbestos was often sprayed onto ceilings and walls for a variety of purposes, i.e. decorative, etc. It was also used as a form of insulation around the pipes behind radiators or wood-burning stoves.

Asbestos was also used in Vinyl floor tiles and their backings, roofing, eaves, shingles, some plaster and paint. Many routine repairs, renovation and maintenance activities – even putting in a new heating system – can disrupt asbestos, releasing millions of fibres into your home, school or office.

Asbestos cement products such as roofs and cladding contain as much as 11% to 20% of chrysotile and 5% to 10% amphibole asbestos (crocidolite or amosite).

As a result of the continuing exposure to meteorologic influences such as rain, sunshine, wind and frost, as well as to industrial atmospheric pollutants, the surface of asbestos cement products corrodes and weathers.

Thus, cement particles and asbestos fibres are released from the surface and disperse in air and rainwater.

Children who regularly play the whole day in the vicinity of such buildings are possibly already subjected to a level of exposure to asbestos which should not be ignored.

There has been concern for many years that young persons may be more susceptible to damage by hazardous asbestos fibres.

The concern about exposure at an early age is particularly relevant in the case of carcinogens as critical organs may be susceptible to cell damage when they are still growing. Fortunately there is no evidence to date that asbestos has such an effect.

However, if children are exposed to asbestos at an early age, their long life expectancy increases the probability that they may live long enough to develop long latent period cancers such as asbestos-induced lung cancer and mesothelioma.

As one eminent doctor commented at the turn of the 20th century in England, when asked if all girls exposed to asbestos in a yarn spinning factory would develop asbestosis, he replied, “Yes, if they live long enough”.

The problem of chronic exposure of children to small quantities of airborne asbestos fibres was high on the agenda at the Third Wave conference (in New York). One paper at the conference told of asbestos fibres being found at autopsy in the lung tissue of a full-term stillborn infant that had never drawn an independent breath.

If you suspect that there are asbestos products present in your home or at work, ring or contact the Asbestos Diseases Society of Australia toll free on 1800 646 690, or (08) 9344 4077, or contact the Department of Occupational Safety & Health in your State (Worksafe).

Home Renovation May be a Health Hazard

You’ve been trying to sell your place for months. But given the situation of the real estate market you’ve decided to renovate instead. You can’t wait to remove that ugly kitchen lino, those stained ceiling tiles, and that old asbestos roof.

Finally, you are going to install a heating system that works. Then your neighbour mentions asbestos and the possible health risk.

The last thing you want to hear is that your kitchen floor could give you cancer. But if your home was built before the eighties, there is a good chance that asbestos is present in your home.

During the 50s, 60s, 70s and 80s asbestos was extremely popular within the building industry because of its attributes to resist heat, flexibility, and adhesiveness.

Architects used to recommend asbestos in building specifications. For example, asbestos was used to make vinyl tiles and the adhesive backing on lino flooring. Hot water pipes were often covered with asbestos lagging.

Millboard with asbestos was put behind stoves and radiators for insulation. Some builders mixed the magic mineral into paint, plaster and Spackle, or used it to decorate walls and ceilings for the ‘textured look’.

More than a million dwellings were constructed from asbestos cement sheeting in Australia between 1945 and 1980. Some of those dwellings have been demolished or had the asbestos roof or cladding removed.

What Does This Mean for Your Renovation?

Don’t scrape, cut, rip up or sand down your lino or vinyl floor until inspected by a recommended professional. The same goes for ceilings.

Also seek advice before commencing removal of asbestos building material. Before you steam down wallpaper or tear down a wall make sure asbestos was not mixed into your paint, plaster or spackle or used as insulation inside the wall.

Never use an ordinary household vacuum cleaner to vacuum dust generated through the repair or removal of asbestos cement products, as the vacuum cleaner will turn into a fibre spraying plant.

Before renovating or demolishing, it is essential to identify asbestos-containing products. It is usually difficult for a layperson to tell which products contain asbestos and which do not.

Potentially any type of board building material over 20 years old could contain asbestos. The only way to be sure is to have the material identified and removed by a licensed asbestos removal contractor.

Need a quote? Fill in our quote form on the right and we’ll get back to you shortly.